Roll over image to zoom in
Click to open expanded view

System to track the position of the camera in 3D

It is a camera tracking system for virtual studio and augmented reality. Scorpio cranes, heads and trips can be camera tracking with the integration system for real-time augmented reality and virtual studio streaming.
Possibility of interconnection between the head of the Scorpio and the crane, which allows us to make a backward turn, the head will follow a target, previously chosen when establishing the distance, according to the movements of the crane (turning, tilting and telescopic).

The Scorpio 23´ is the first of a series of telescopic cranes that Servicevision is designing to have soft, silence and effective camera movements true telescopic arms.

To be more rigid and uniformed, the arms are made with aluminium extrusion.

The arms are guided true wheels in top and bottom to be more stable, and moving with two lateral cables. Like this the adjustment of the cables is simpler and is twice safety.

There are no reviews yet. 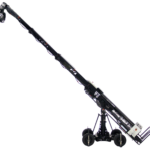